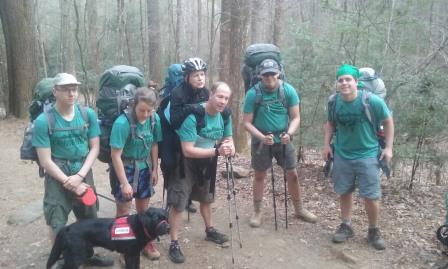 When I was thinking about being prepared for the trail, I had numerous things going through my head. I thought about enjoying my spring break, how much relaxation I was going to lose, and what the possibilities of not enjoying were that could happen. When I got on the road on Sunday, I wasn’t nervous, and I felt like I had been doing stuff like this my whole college career. With the ROTC background, it didn’t seem like it would make me nervous or want to try and find a way out. I was getting more excited to be on the trail and get going and be back home as soon as possible. When we distributed the stuff, I didn’t think anything about it because it’s normal to have stuff that isn’t yours in your bag because it’s helping the team more than yourself to be successful. Once we started setting up for sleep, I felt like it would be hard to connect with the group because I set my stuff on my own and had my military precautions going through me, preparing for the worst and making sure I was ready for anything; even when I was sleeping I never dared to turn on my bright light and used my red lens because I was used to having light discipline.

Once we got through the first night, it was freezing cold to get through and I tried to keep on every layer I had that we took out from the first night. I felt like being the first one up because I wanted to be ready and not have any possibility of being late. With Sean’s guidance throughout the entire trip, it seemed that at times I would either get annoyed with some of the precautions he gave me because I get told one thing, and a minute later, the whole plan changes and makes me question what the right thing to do is from his guidance. Somehow, it felt like he and his son, at times, were the better equals, even though they had more experience than us. The rest of the group felt unwelcome because they did not have the experience of living in the wilderness for a couple of days. Where I did not take part in Boy Scouts, I still had that outside experience of working with the team and it did not make me sway from making sure I was doing the best I can.

When we woke up and got ready to go up Springer Mountain, we kept the air cold in the car to get our bodies used to the air in the AT so we weren’t in a shock later on at night. When we got set, it still seemed that we weren’t together as a group yet until we understood how to carry Dr. J and figured out how to ask for each other’s help. When we got up Springer Mountain, we had a hard time figuring out how it works because it was our first time, and the view at Springer made it better to start cooperating with each other. Once we got down, it was much faster and more cooperating with each other. Once we had a meal and got to Three Forks, we started embracing our “trail names” that we made for each other, because we learned that Hopper got her name from one of her mentors along the trail. My name was “Goldmember” because when we got to Three Forks, we set up our tents, and when I was helping with a bear bag, my pants ripped from the crotch all the way to the back of my shorts, and I tried to fix them with gold ducktape and got called “Goldmember.” Late at night, the college students got more competitive with each other because one of them did not know a meme called “cash me outside” and we laughed so hard about it.

Throughout the week, we would get a ride and the college kids rode on the back of the tailgate. We stopped halfway to pick up trail magic, and when they tried to leave, Philip almost fell out, and I had to tell them to stop. It was very funny because we almost were gonna fall out part of the time, but we still enjoyed being on there. Every night after that was warmer and not as bad as the first night. On Tuesday, however, we got rained on before we could get to a shelter for a bit, and we were worried of getting rained on after we got to the shelter at night. Once we got set up and about to sleep, it rained and it hailed on us at night. We were so worried throughout the entire time. By the time 9:30 rolled around, we gave up and passed out sleeping and it got better throughout the night. When we got to the third day, we had multiple people help us get through the trail and we got to Woody’s Gap where we saw a bus that was made by two buses, and we got some trail magic from them too. The bus looked like a pirate ship. When we left, we got told by Hopper that there’s a rumor that went around that they had a cult and would have people come with them and brainwash them to work on their garden. It was crazy to hear from a knowledgeable person.

On Thursday, we were all hurting: it was a struggle to keep morale high, people’s feet was starting to get hurt, and even Hopper’s knee was bothering her. Midway, we realized we were going completely slower than making 16 miles within 3 days near the end, so Sean and Hopper made the decision that we were gonna be done, after 4 days and 31 miles for the week. This was more than what the people who started with Jacqui did–Katahdin in 3 days. Once we started heading out, we had one more night of recreational time and we had a great time, we were smiling, morale came back to life, and we were doing completely better than when we started. We were all comfortable with each other, we felt like we knew each other for years, and I couldn’t have gotten through that without those guys.

So after we started eating real food, and starting to head back to civilization, I was happy that I went on the trip, because I made these great friends, did a great thing for an amazing person. I got to learn that you do not have to be born perfectly to be successful and happy with your life. Dr. J has a Ph.D. in communication and lived her life’s dream of trying to hike the Appalachian Trail. All she had to do was ask for help from a few college kids who gave up their spring break for something special. I love everyone who I accompanied on this trip, and looking back, I would go back every single time. I’ll possibly do it in June with the crew again.