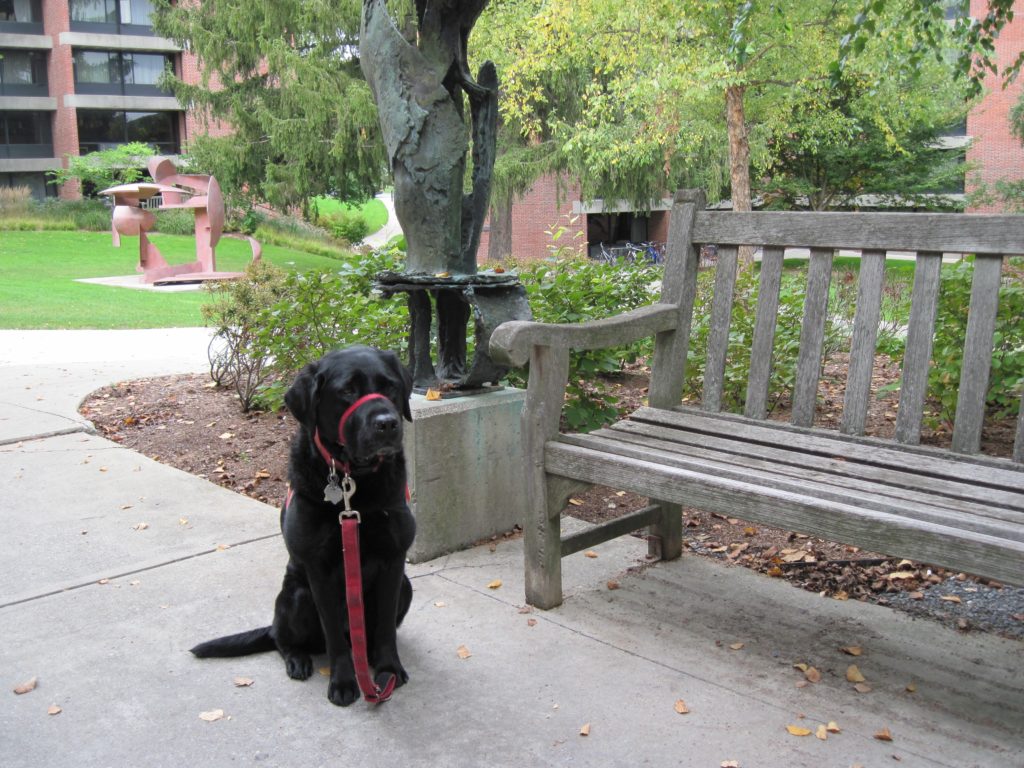 Hi friend!  Saint here.  Mummy and I have been very busy lately. We’ve been riding in our car for long trips.  This last time we even got to stay in a place that had two beds to sleep in!  Don’t worry.  I checked them both out very well for Mummy.  They were very soft and bouncy.

Our last ride was a “ruff” one.  Mummy put my food in a bag and put it in our car.  Then she put some of her clothes in a bag and put those in the car beside my things.  She said we were going to ride for a long time and that I had to be a good girl.  So I was a big help as she got things ready.  I sat very patiently in my seat and made sure she didn’t forget my treats.

We rode a long, long way.  Mummy said we were going to Williams College in Williamstown, Mass., and that we were going to meet with other humans about hiking.  Now that Mummy and I are hikers and are planning our big trip for the Appalachian Trail, we needed to meet others and tell them about our plans.

After 10 hours of driving, Mummy was tired.  I was, too, but I had a good long nap, so I would be extra alert taking Mummy to a strange new place.  We arrived at “The Gathering” for the Appalachian Long Distance Hikers Association (ALDHA) annual meeting.  There were a lot of humans here.  And lots of smells!  I noticed, though, that no one had a cool chair like my Mummy does.  How do their dogs get on their laps to protect their human?

Mummy didn’t seem to mind, though: she drove right in and started talking with them.  A nice lady helped us find our way around and showed us some very important rooms.  Her name was Laurie.  Mummy was very appreciative.  Her chair doesn’t go down stairs so we need to sometimes go on mini adventures to find accessible paths.

Once Mummy and I had checked the whole place out, we decided to find our sleeping building and get some rest.  This was where we found the two beds!  It was a little drive from our meeting place, but it had a lift for Mummy’s chair and we were able to go in and get some rest.

In the morning, we went back to Williams College.  Mummy said she was going to talk about our big hike and show pictures and videos about it.  We found our new friend, Laurie, and after some rearranging to accommodate Mummy and I we were able to get set up.

About 10 humans came to visit us and learn about what we were doing.  They were very excited about our plans.  Laurie came to listen, too.  Afterwards, Mummy talked to her for a very long time.  Apparently she knows lots of important people who are in a club called Appalachian Trail Maintainers Clubs who were very passionate about making the Appalachian trails accessible for everyone.  Mummy was very excited about this and was happy that Laurie was going to bring our story to her friends.

For lunch, Mummy and I decided to eat outside.  It was a beautiful day and I was able to lie in the grass and watch the humans walk around.  It was very entertaining.

It was here where we met Mr. Bill, aka, Sprained Rice.  He’s an enthusiastic hiker and thought I was adorable (to which both Mummy and I agreed), so he came over to visit with us.  He told us that his funny name was a trail nickname that he’d earned since he’d been hiking so many years.

He and Mummy chatted for quite some time.  Mr. Bill said that he wrote stories for the ALDHA newsletter and asked if he could do an article on us.  Mummy checked with me first and we both decided Mr. Bill was very nice and that this was a great opportunity.  I can’t wait to see our big story!

Soon, it was time to go and drive the long trip home.  Both Mummy and I were very tired.  It was a great adventure though.  We met a lot of new people, made some lovely new friends and slept in a room with two beds!  How cool is that?  I wonder if I can persuade Mummy to put another bed in our house, too.