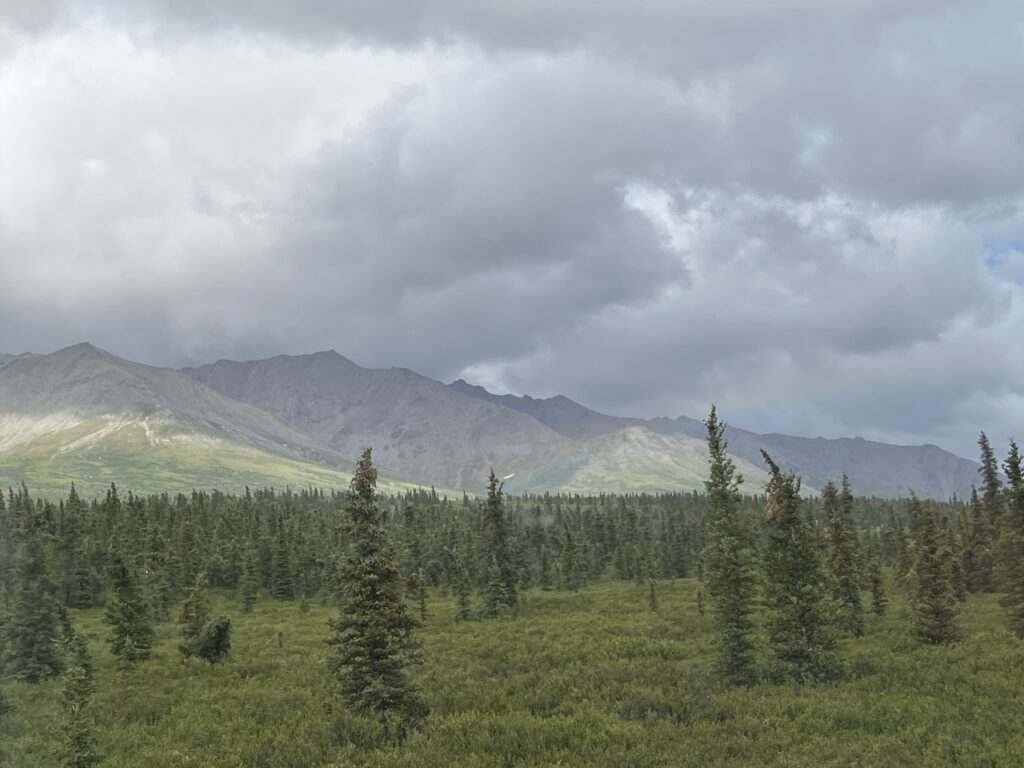 Hello, everyone.  Saint and Dusty here!  We know that you’ve been waiting eagerly for our next blog.  It’s been challenging because we have been on the go so much.  Also, we have been in some remote places and have not had the bandwidth to upload blogs.

We want to share a very special time with you. On July 25, 2022, we went to Denali National Park and Preserve.  Denali is the highest peak in North America.  The park and preserve is nearly 10,000 square miles.  We drove down to it from Fairbanks.  There was no place closer where Mummy and Karma, her wheelchair, could stay.

We had booked an accessible bus tour for the afternoon to learn about Denali’s natural history.  Aunt Kimmie was with us, so that made it extra special.  On the way down it was really windy.  Mummy had a hard time holding Miracle, our van, on the road.  We made it down safely, though.

When it came time for us to board the bus for the last tour of the day, they had lost Mummy’s special information and did not have a wheelchair accessible bus there.  After some frantic calling, though, they got one with a very nice driver, Sarah.  We then got extra special treatment.

Sarah told us that because of the harshness of the climate and the shortness of the growing season, there is not a lot of wildlife in the preserve.  Just as she said that, one of the bus passengers called out that he saw some moose running.  We have a picture of them, if you look closely.  It appeared to be a female chasing another female and her calf.  Perhaps the mother and baby had intruded into the other moose’s territory.

We could not see Denali itself from the park.  Because of some road erosion and such, you can’t drive closer than about 70 miles to the mountain and it was a rainy, cloudy day.  Don’t worry, though.  On several clear, sunny days, we were able to see Denali from where we were staying in Fairbanks: The Taste of Alaska Lodge.

We hope to send you another update, soon.  In the meantime, take care.  Be well.  Hugs and wags.