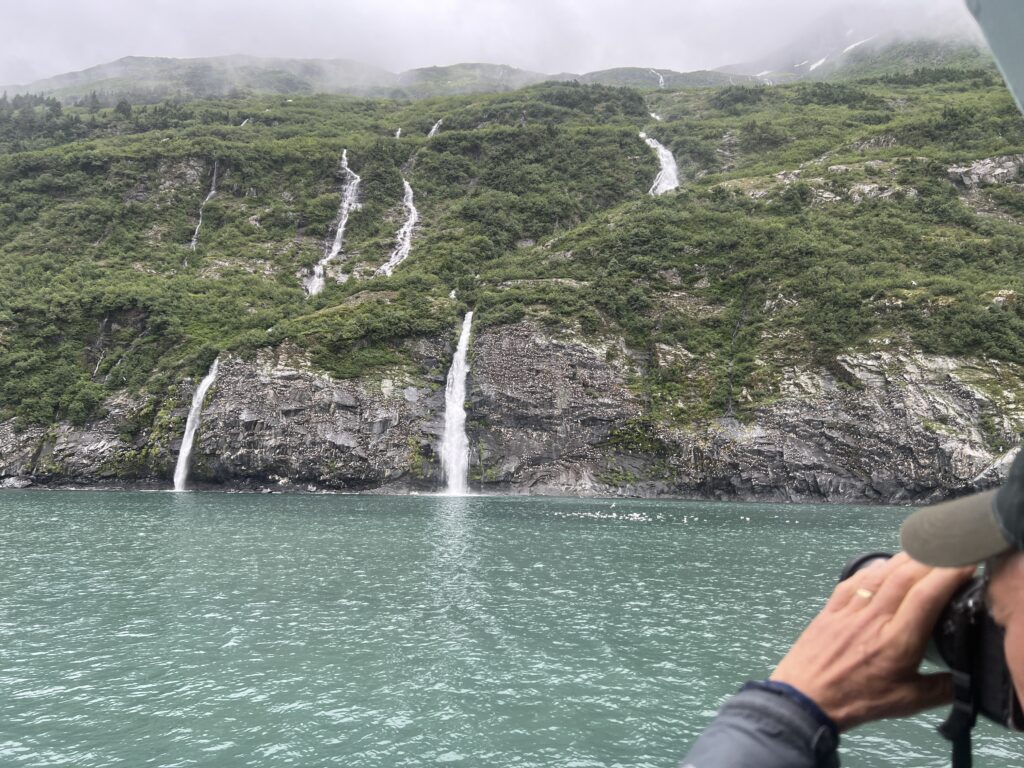 Hello, Everyone.  Saint and Dusty here!

We hope that we haven’t worried you by our silence.  We’ve been doing great.  We’ve seen so much and had so many adventures.  We’ve really been covering ground.  Since we set off a month ago, we’ve driven more than 8,000 miles.  Mummy sure has strong arms.

We wanted to share a really special time with you.  On Friday, July 22, we took a glacier cruise out of the port of Whittier, Alaska.  We drove down to Anchorage, from Fairbanks, the day before.  Whittier is about 90 minutes from Anchorage.  You used to be able to visit it only by boat or train.  There are mountains between it and everything else.  In the early 2000s, they decided to make the rail tunnel bimodal and have cars and trains both use it.  It is the longest such tunnel (2.5 miles) in North America and able to withstand -40 Fahrenheit temps and 150 mph winds.

Once we got through the tunnel, we got to the cruise ship parking lot.  It was raining and cold, but we were hopeful for an amazing time.  Prince William Sound usually has some pretty foul weather.  It’s really calm, though.  Aunt Kimmy had joined us for part of our Alaska trip, so that made it even better.

The ship people were so nice.  They moved seats for Mummy.  We had a great table and view outside.  They served a delicious lunch.  And we saw amazing sights.  They even made it possible for us to go outside on the deck at some points.

The weather cleared enough that we saw 26 glaciers!  It’s sad that in the 10 years that the captain has been doing these cruises, the glaciers have retreated so much.  We saw sea lions.  We saw a humpback whale.  We saw our favorites: sea otters.  And we went close by a rookery for black-legged kittiwakes, a type of gull.  We’ve included a photo of that.  Look closely.  It’s the largest such rookery on Prince William Sound.  Boy are those gulls loud!

We would definitely give this an eight paw rating.  If you have the chance, don’t miss it.