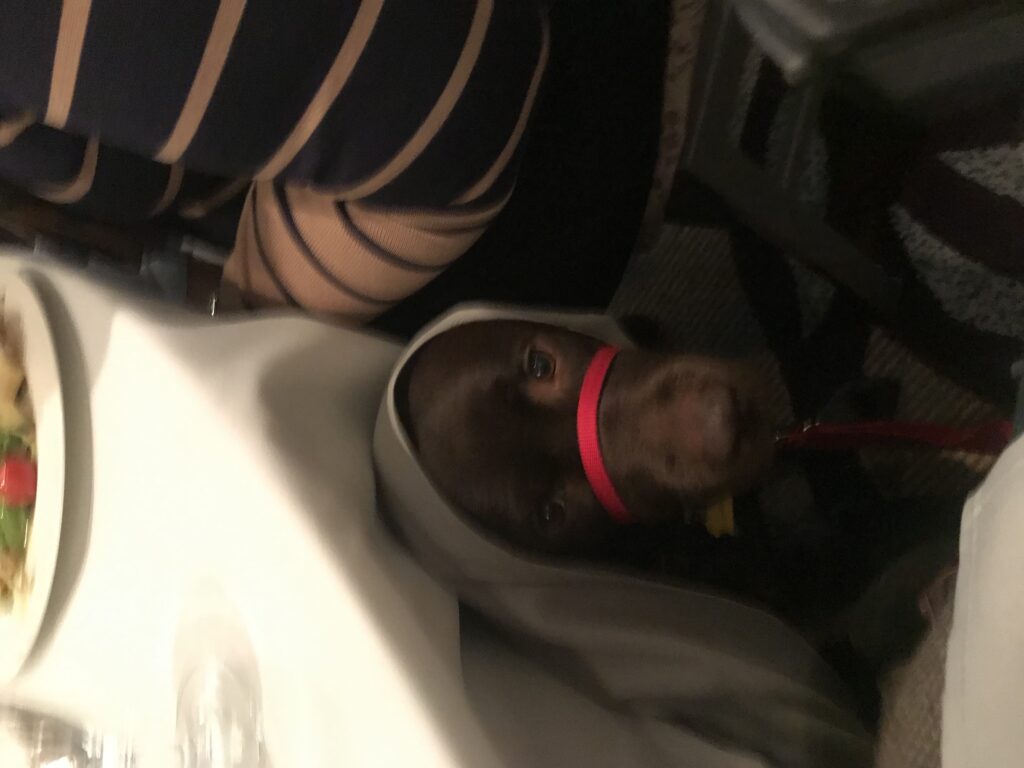 Hello everyone! It’s Dusty here. I’m not sure if I’ve formally introduced myself yet, but I became a part of the family in August of this year. I’m a chocolate lab and I was trained by Assistance Canine Training Services, also known as A.C.T.S., in North Conway, New Hampshire. The first time I met Mummy and my sister, Saint, I was so excited. I haven’t been able to stop giving them kisses since then. Mummy has nicknamed me Chocolate Kiss.

Mummy and Saint have been telling me about all their adventures. They recently took a road trip across the United States. I couldn’t wait to go on an adventure with them, so when Mummy told Saint and me that we were going to Detroit, I was excited!

It was my first big trip with my family. Mummy had to go to a conference in the big city of Detroit. Since it would be too far to drive, we had to fly in a plane. We drove down to Bangor. Our plane was due to depart from Bangor International Airport. I’d never flown before and I wasn’t sure what to expect.

Everybody was really kind to Mummy, Saint and me. Before we could board the flight, we had to go through this special section of the airport called security where a person in a uniform patted Saint and me down. That made me really happy and I made sure I wagged my tail a lot.

I wasn’t sure what to think when we boarded the flight but once we got on, I just slept on the floor. I got nervous when the airplane took off and landed. It was loud and bumpy but Saint and Mummy were very calm, so I knew that it was OK.

The big city of Detroit was so cool! There were lots of people, sights, and smells. The conference was interesting and Mummy talked to a lot of people.

The hotel we stayed at was top notch. They even had special beds for Saint and me. We cuddled on them for naptime but when it was time for Mummy to go to sleep, we joined her on the bed because we didn’t want her to be lonely. I made sure to cuddle really close to Mummy but she told me that I was a little bit of a bed hog. I just wanted to make sure Mummy was safe and comfortable. When we went inside the hotel room at the end of our days at the conference, Saint and I loved to roll around on the floor. After a long day of walking, it felt nice to stretch the back.

There was a lot of action in Detroit. I got to ride on the airplane, trains, and a shuttle bus. Saint seemed to know exactly what she was doing. She’s a seasoned explorer and takes really good care of Mummy, so I look up to her. It was my first time doing a lot of things.

I want to impress Mummy but sometimes I get really excited. Mummy took us for daily walks. We tried to go to the river but there was a lot of construction going on and some of the sidewalks were impassable. We wanted to go to the dog park too but sadly there were steps. Mummy can’t go over steps with her wheelchair. Hopefully, they make it accessible for people like Mummy in the future.

Of course, the real action was when Mummy took us for one of our walks and I saw this strange, little creature with a long tail. It was fast and I was very intrigued by it. Mummy called it a rat and I wanted to say hi but Mummy wouldn’t let me. You should have seen it. It was so cool!

Everybody was extremely kind to us. We were rock and rolling around the town and there were a lot of kind people who helped us. The people at the airport were especially nice (especially when they patted us down at security).

I hope we get to go on another trip soon!

Meanwhile, wags and chocolate kisses to all of you.

View all posts by Tiffany Smith