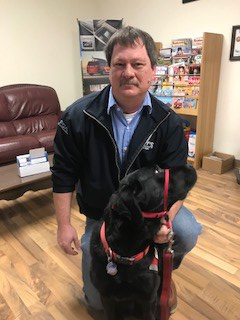 Hi everyone, Saint here! Today I wanted to tell you all a funny story of something that happened to Mummy and me a few months ago. It all started when Mummy noticed that Miracle (Mummy’s van) was making a funny, squeaking kind of noise. We took Miracle to Percy’s Auto so that they could look at her and tell us what was wrong.
We sat in the waiting room for a while until a man came into the room to tell Mummy that nothing was wrong with Miracle. Mummy insisted that we could hear a noise coming from the vents that sounded like squeaking. So the man left the room again to look at the car more closely.
When he came back, he told Mummy some interesting news: Miracle had been infested with mice! He said it was the worst infestation he’d ever seen. When the mechanic climbed under Miracle and started to take her apart, he said he got covered in mouse droppings. I’m sure it wasn’t very funny to him, but it sure made me laugh.
Can I tell you guys a secret? I knew some mice had gotten into Miracle. I didn’t want to tell Mummy, because I like the mice: they’re my friends. I told them not to chew up any of the wires that keep Miracle running and they listened! The guys at Percy’s told Mummy she was lucky they didn’t chew the wires, but I know the truth.
There are a lot of mice around where Mummy and I live. The winters are pretty brutal and cold, so I let the mice hang out in the basement. Sometimes Mummy leaves the car door open in the garage so that it doesn’t get stuck from the ice. The mice walked right in and made some little nests. They didn’t chew wires, but they did manage to get to one of Mummy’s string bags, a pair of gloves and her sour hard candies. The mice are gone now and so are the droppings. Miracle doesn’t squeak anymore and all is well. What’s the funniest thing that’s happened to your car?

View all posts by Evelyn Racine