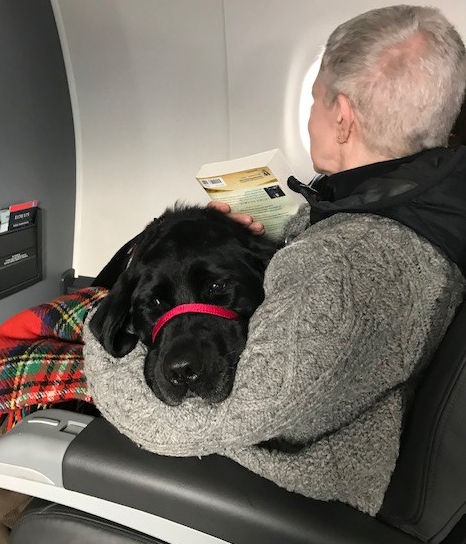 Hello everyone, it’s Saint. I hope you’re all doing great. I recently went to New Orleans with Mummy and had a great time. There’s always so much to see when we go somewhere new, but boy is it tiring! Our trip was very eventful and we got to travel with two of our friends, Leigh and Alana.
We also ran into P.J. along the way. He is a friend we don’t see very often. He was one of the people who helped Mummy climb Katahdin. He found us at the airport and said hello to me before he said hello to Mummy. That made me feel pretty special. It was a nice surprise to see our friend while waiting for the plane to Maine in Philadelphia. We had to stop there on the way back from New Orleans. Once we got on that plane, though, they made us get off again and said that they had to find a new one to take us home. I didn’t mind too much, though.
I don’t mind planes, either. I usually get my own seat. The hardest parts are when it’s leaving or coming toward the ground: that’s a little scary.
We had a lot of new experiences during our trip. Since Mummy needs an aisle chair to get on and off of the planes, strangers usually have to touch her a lot, which makes me nervous. The airport we left Bangor from, though, used a new thing called a Transfer Kit that was much more comfortable for Mummy. This meant I didn’t get as nervous, so it was good for both of us.
Whenever we fly something always happens to Mummy’s wheelchair. This time we landed in D.C on our way to New Orleans and they couldn’t get it to work at all! It was very stressful, but very nice people took care of us and tried to help. Eventually a man in a suit came and fixed everything right away. I’m very thankful for him because then Mummy and I could continue on our journey.
Something really weird happened in Philadelphia, too, while we were there. The floor filled up with water and everyone kept saying the airport was flooding from a sprinkler, even though the sun was out. I wasn’t scared, though, because Mummy wasn’t scared, which meant it was no big deal. Water doesn’t bother me anyway and a nice man in a yellow vest escorted us around while others waited. It was very nice of him.
Needless to say, we had a very interesting trip. Do you travel often? Have you ever had a weird trip to the airport or run into friends you didn’t expect to see? Life is full of fun adventures and surprises and I love telling you all about mine. Until next time, take care!

View all posts by Brandy Smith