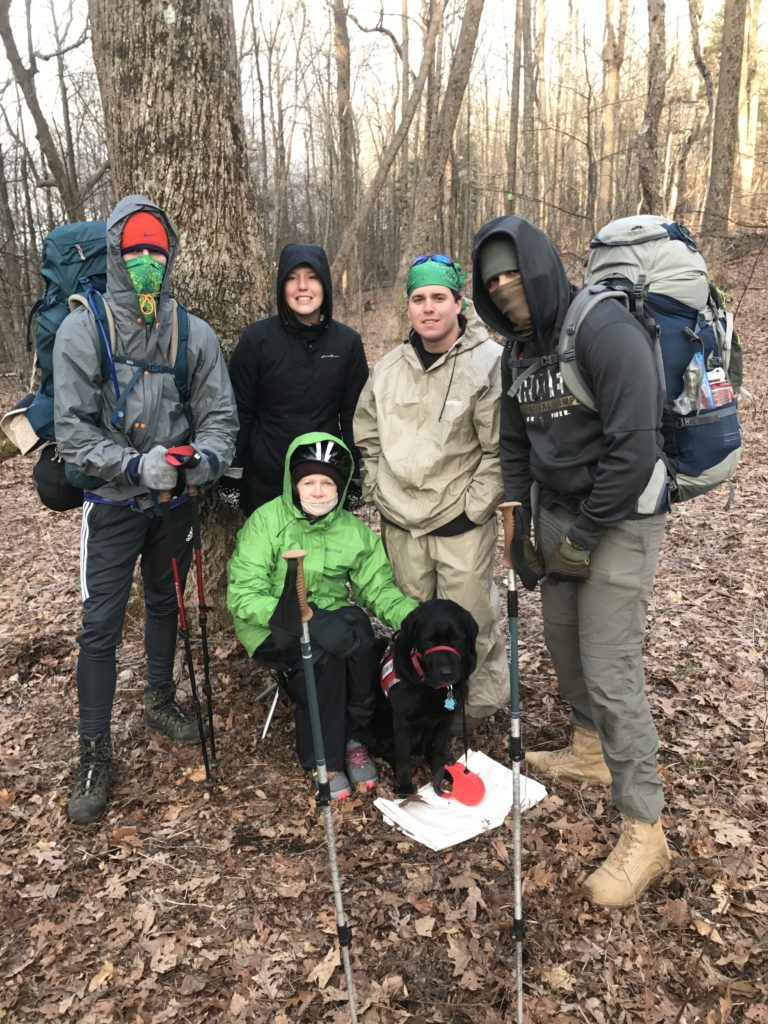 As we hiked, the day warmed and we were able to shed layers. As always, I was absorbing a lot of the Sherpas’ body heat, so I could get very warm. We stopped for our lunch break at a place about a mile or so from the trailhead where Honey and Bear were to meet us. Sean decided that the Clemson crew would eat their Mountain House meal, then be able to eat something else that Honey and Bear might bring. While we were taking our breaks we met Sassafras and Gray Eagle. We also met an ATC ridge runner who keeps a check on the trail and the people hiking it. And Honey hiked up from the parking lot to meet us. She brought bread and meat that the Clemson Crew and Hopper dug into. She said that she had started off hiking with Bear, but that his legs just couldn’t do it. He had had the cheese and other things. Tuesday was his birthday so they had a birthday cake that he wanted to share with all of us. Honey left us before we broke our lunch camp. She wanted to go back and check on Bear.

Sassafras was a retired educator. He had grown up in the country and they had done lots of hiking and camping as children. As an adult, he had married and had children—daughters. He didn’t do much hiking during that time, but always wanted to do the Appalachian Trail. He had done some practice hiking the previous summer with his grandson, who planned to join him this summer. The grandson was in high school. Sassafras got his trail name because he had always loved sassafras. He said that he swung back and forth between confidence and feeling overwhelmed and doubtful. He wanted to help us by doing a rotation, but was cautious about his ability. We encouraged him and said that anything that he could do–even a minute—would help us. So we got him into the harness and me onto him and away we went, after packing up from lunch. He did just fine. He was tentative at first, but then found his legs and confidence. He was a sweet, gentle spirit who lightened our loads in more ways than one.

Gray Eagle came along at about this time, too. Gray Eagle had just retired from the USMC and a job in Washington, D.C. I didn’t get to know much about him. The carry was harder for him, so he did not talk much. He did do a whole rotation with us but it took much out of him. He sat down to rest after that.

We saw both Sassafras and Gray Eagle on the trail the next day. Gray Eagle acknowledged us. Sassafras did another rotation with us. We would have one more set of people help us with a carry the next day, Wednesday.

When we reached the trailhead where Honey and Bear were waiting, we could see that Bear was pretty done in. His legs had just given up on him and he had had to go back to the parking lot. He was resting in a plastic chair. They put me on tail gate and we all had carrot cake and celebrated his birthday. He enjoyed visiting with the kids, especially Lindsay. We decided to get a ride over a couple of miles so that we could make it comfortably to Gooch Mountain. We needed to rendezvous with Heidi, Sean’s wife, around there the next morning so that she could pick up Nate and the Clemson Crew could get its resupply. At this part of the trail, the road would not be patrolled, so the kids were able to sit on the tailgate. Bear drove with Saint and me in the front. Sean, Honey, Hopper and Nate sat in the backseat. At one point we heard a yell. Philip had fallen off the tailgate but had not been hurt. This was also where Jimmy picked up some trail magic—a Coke that Bear had left along the road for anyone who was thirsty. It was around here that Bear also stopped to pick up trash from people who were camping. He and Honey often that did, which was a great help to people so that they did not have to carry out all their trash.

They dropped us off and it was a race now for a place to camp. The weather was turning. There was danger of strong storms, thunder, lightning and hail. We wanted to try to get to shelter before things hit. This was when the students really, really came into their own. They felt the urgency and did longer carries than normal. Our “mile or so” to the shelter wound up being longer. As we thought that we were getting close, we could hear the thunder getting closer. It was time to switch, but Philip did not want to take the time. He wound up doing the longest rotation of the week at that time. He brought me safely to the shelter and got me out of the carrier so that I could sit down.

There were not enough places in the shelter to accommodate everyone. Smooth was there and offered me his spot downstairs, offering to go upstairs. But going to the bathroom through the night, which I always have to do, would be problematic. It was my call and I said that I needed to sleep in the tent.

The problem was where to put the tent. The area around the shelter was already quite filled with tents and there wasn’t much level ground available. The ATC had a couple of volunteers, staying at the shelter and helping out hikers: a man and his wife. I didn’t really meet the man. But the lady’s name was Mother Nature. We had a chat and she told me about her health issues. She had been told by doctors that she should not and really could not hike. But she was still doing so because she loves it. When she learned that we were looking for a place for our group to camp, she said that she would take us to a place nearby that was secluded and not open to regular camping. This worked out wonderfully for us. It was so kind of her—we had a nice place to ourselves. We took extra care to Leave No Trace.

During that night, we experienced a strong storm. All that had been predicted—short of a tornado—hit. The kids were playing cards at first in Lindsay’s tent. But as the weather got really bad, the guys gave up and fled to their hammocks. They got wet but were so exhausted that they slept deeply. Fortunately, it didn’t get as cold that night. I was thrilled by how well our tent stood up. We were snug, warm and cozy in our tent all night. After a few hours, I gathered that Big Agnes would come through, so we were able to sleep well.

It was still a bit raw in the morning. We put on our rain gear. I noted that Philip, like Hopper, had Rain Togs. The others had variations. Mother Nature came to check on us that morning and gave us a chance to thank her once more. Then we made a stop by the very nice privy. I have become something of a connoisseur of privies. The ones at Katahdin were lovely. They were my first encounter and were wonderful—very clean and spacious. The ones at Debouille were pretty dreadful—really dirty and unpleasant. This one was fine. And it was to be our last for this stretch of the hike. A couple of the guys carried me in using a fireman’s carry. Then Hopper helped me pivot and sit. From there I could manage on my own until it was time to be carried back out.

We needed to meet Heidi by 10 a.m. Since we were quite close, that was not a problem. In fact, we were early. It was still cool and damp, so the kids sat me in a sheltered spot and made a little windbreak for me of a raincoat. Heidi came along with the Mountain House meals and a box of doughnuts that the crew devoured. She took Nate with her so that he could attend his swim meet on the weekend. She had a chance to meet Hopper. And I asked her if she could help me by finding an accessible place to stay for a while in Clemson. She said that she would be leaving town in a day or two, but she would see what she could do. We had realized that Sean had left his phone in the Clemson vehicle that was at Springer. So he was using Hopper’s cell phone to communicate. He had also brought a separate camera that he used to take photos. Heidi did some sleuthing and did find us a place to stay. She belonged to Airbnb and went that route. I had never really paid attention to that before. She did some digging and found a great, ACCESSIBLE place in which we could stay. It wasn’t easy to find because it wasn’t listed for the start of when we needed it, but Heidi did some sleuthing and make it work. We’ll have much more to say about Airbnb in upcoming blogs.