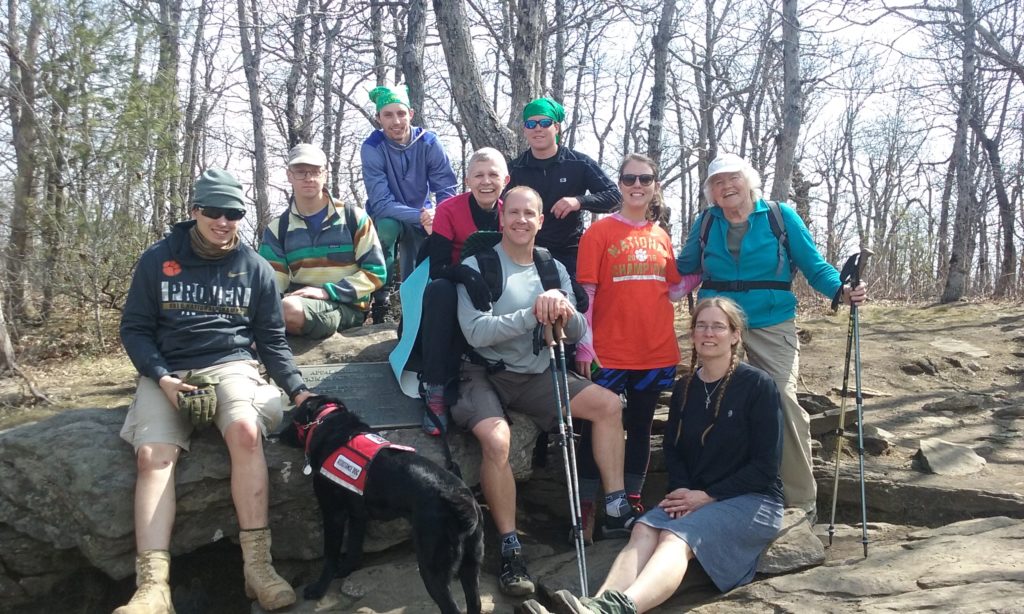 Sunday, March 19, was D-Day minus one. We were to meet the entire gang, most of whom we did not know. We got a message from Hopper that she would be arriving around noon, driven by her sister- and brother-in-law. But before she arrived, there was a knock on our door. We opened the door to an older couple: It had to be Honey and Bear, and it was. They came in and we had a bit of a visit. Honey is rather hard of hearing. Bear wanted to know what they could to help me. We really couldn’t think of anything. They offered to make a Walmart run for us. I thought that it might be wise for them to wait until Hopper arrived.

Hopper and her in-laws arrived a bit early. These are relatives through Hopper’s marriage to Mike. We had time for a little visit, although the room got pretty crowded. Hopper put down her pack and hiking poles. Then pizza arrived. Honey thought that people would be hungry, so had ordered a pizza to be delivered. She was thinking that the leftovers would feed the Clemson group, who were supposed to arrive around 2. It was such a kind and thoughtful thing to do. But a single pizza would not go far with hungry college students, particularly after five people had eaten from it.

We took the pizza out into the breakfast area where we had a chance to visit a bit. I was entrusted with the remaining few slices for the kids. Then Hopper’s in-laws headed out. Hopper and Honey and Bear set out to do a little shopping. They were concerned because there had been some reports of ice on the trail. And no one had ice cleats. They went off to try to find some and get other things from Walmart. They couldn’t find any cleats at the outfitter in town—as Hopper said, he was more a tourist outfitter than a hiking outfitter. So they called another outfitter (at Neel’s Gap?) and learned that that one had cleats. So Honey and Bear were going to go buy some. They had barely set off than Sean and his student group arrived.

So we met the Clemson Crew. They are Brad Bradley; Jimmy Knott; Lindsay Costin; Philip Gee. We would learn a great deal about them on the following days and come to admire them greatly. But for now we were focusing on how to pack what they needed to take.

We would be two packs short. I did not have a pack. And the person carrying would not have a pack. That meant that each pack would have content for more than one person. Hopper had bought a new, larger pack made of cuben fiber so the pack itself was light but very strong. She managed to carry most of the gear and such for Saint and me. But we had the risers for the cot that needed to be distributed: one set weighed about five pounds, and we had five sets, so each pack had one set. Thus the packs wound up being around 45 pounds or so. This is much heavier than a typical thru-hiker would want to carry. And, unlike with the Katahdin climb, there would never be a time when someone was not carrying something heavy: if it was not me, it would be a heavy pack. So people got no respite. We knew before we started that the small number was not ideal—having one or two more people would have made a huge difference because then the rotations would not have been as frequent and each pack would have not been so heavy. This was born out through experience.

Hopper took over with the pack shakedowns. Sean had done some work with the group before they came. Now Hopper had them empty their packs and went through each one with them. She also had them bring in my pile of gear and spread it out. I didn’t have to go through a real pack shakedown because Hopper had already done it with me many times over when we had weighed and listed everything that I might take. For the kids, though, it was eye opening. Hopper didn’t just tell them not to bring something: she explained why it would be an unnecessary luxury. She worked with the guys first, then took Lindsay, our lone female, off to the side and went through her pack with her. Soap, mouthwash and deodorant were all luxuries that people were told to leave behind. So were multiple changes of underwear. Hopper told Lindsay that she could always turn her pants inside out. The kids noted that they would get smelly. Hopper explained that everyone would acquire “Hiker Funk” and so it wouldn’t be noticeable. The Clemson group had a four-pack of toilet paper that got distributed. And they had a mountain of Mountain House meals that a company named “Campmor” had donated. They had food for Sunday through Wednesday, when Nate would leave us. Heidi would come pick him up and the Clemson gang would get its resupply then. So we had a definite place we had to get to by 10 a.m. Wednesday morning, when Heidi would arrive at a trailhead.

Hopper next instructed the kids on how to pack their packs—what should go in the bottom, what should go on top. She talked about pumping water and bear bags. She also asked about camping experience. None of the kids were hikers. Philip had done some camping. Jimmy is in ROTC, so they go out for field exercises on weekends and will go out for two weeks this summer. I don’t believe that Lindsay or Brad had ever camped out. For all of them this was going to be a huge stretch. But they were game.

After they had their packs packed with their items, all the packs needed to take a set of bedrisers. (There were five sets.) Someone had to take Saint’s food. Hopper took most of my things: tent, cot, air mattress, food, clothes, miscellaneous. This made for a heavy pack for her. She said the first time that she had started hiking the AT, she had weighed 110 pounds and her pack weighed more than 55. She had since learned to pack much lighter.

As they packed, I got a chance to talk a bit with the kids and started to figure out who was who. Nate, because of his experience, and Sean didn’t need pack shakedowns. The Clemson Crew were very interested in me and Saint, what our goals were, what had brought us to this point.